On Labor Day weekend (Sep 3-5, 2010), the Moratorium on Deportations Campaign undertook a “Freedom Ride: Immigrants’ Caravan” through the vast suburban sprawl of the Chicago metropolitan area. The 3-day, 100 mile bike ride, as well as the actions, rallies and meetings along the way, addressed the collaboration between local police and Immigration and Customs Enforcement (ICE), the rise in xenophobia as expressed in recent English-Only legislation, and the locally-specific ways in which capital accumulation is predicated on the degradation of work, the management and policing of migration, and the reorganization of urban/suburban space.

As the expanding logistics management industry consolidates enormous warehousing centers ( “inland ports” ) in foreign trade zones west and south of the city, tens of thousands of precarious workers, in large part immigrants, are pushed out of the city into planned suburban developments and into “perma-temp” jobs. The vast suburban landscape we rode through is a system of highly policed and regulated subterritories that are at once separated and connected by a limited number of county roads and an expanding system of freight rail lines. The logistics industry does not consist only of the warehouses and the flow of commodities in the supply chain, but also of the residential districts and of the efficient management of the flow of cheap, precarious labor – it is, in other words, a “people” system. Suburban Chicago appears in this sense as a logistical landscape: that is to say it is a spatial and social arrangement of differential mobilities – and immobilities – that links land speculation, the efficient warehousing and distribution of commodities and the efficient warehousing, detention and controlled migration of people. (RB) 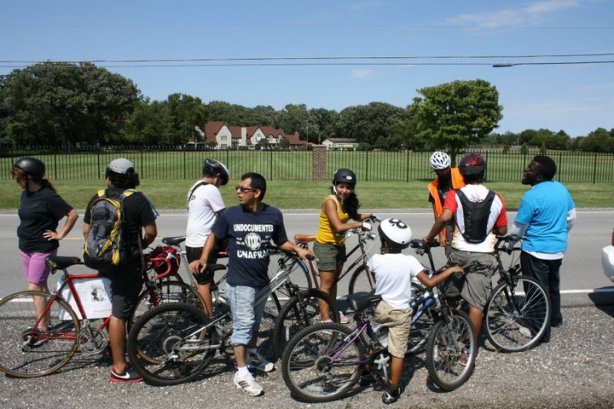 The Freedom Ride was both a moving protest and group learning experiment. It was an attempt to journey between political issues and locations, and to connect with other groups such as Immigrant Solidarity DuPage, Warehouse Workers for Justice, the campaigns for immigrant rights in Joliet among others. It was also an opportunity to take our demand for a moratorium on deportations into some of the townships most prolific in passing recent anti-immigrant legislation. This text was written before the ride as one way to frame the action; it also formed the basis of two statements we distributed along the way: 5 Statements from the Moratorium on Deportations Campaign and Our Solutions, Our Demands.

For every crisis, a scapegoat

The full effects of the global economic system are once again hitting home: expanding poverty; the plunder of all public assets; environmental devastation; the degradation of work and workers; the overt hijacking of the electoral process by corporate sponsors. The most recent crisis has shattered the American myth and the middle class that lived it. It exposed the US Government as working for corporate interests, using its power and resources to guarantee them immunity from the devastation they have created.

History teaches us this much: times of economic meltdown are also times of fervent speculation, when the agents of the crisis capitalize on the misery they have created. In these times, there is a rush to hide the machinations of the boom-and-bust game behind a dense and foul smokescreen. And what is today’s smokescreen??? We are to believe that the root cause of our social, economic and political problems is immigrants and that the solution lies in the realm of prisons, detention centers, militarized borders, increased surveillance, mass criminalization, racial profiling and monoculture.

We have seen this before of course: the disenfranchisement of immigrants, their reduction to second-class human status while profiting off their labor, has a long history. It has its roots in the history of colonization, in the dehumanization, enslavement and degradation of native peoples as a condition of European expansion and accumulation. It works by defining entire populations as disposable labor. That is to say, it is racializing. And today’s white American citizensmight do well to remember: in the 1800’s it was the southern Europeans who were seen as not white; in the early 1900’s it was the Italians and Eastern Europeans who were the dangerous new immigrant races; by 1920 it was Jews, Chinese, Germans and Japanese who were the threat to American purity and the danger to its economic, political and cultural stability. And so on.

Today’s anti-immigrant “arguments” are familiar ones: they are criminals; they are threatening our culture; they are not assimilating; they are not as good as us; they are taking away our jobs, our opportunities. These are the talking points of a myth that represents immigrants as illegal and citizens as worthy and legitimate, to mask the dynamics of migration as a result of US foreign policies and of US economic interests both at home and abroad. History teaches us again: nativist resurgence coincides with times of economic recession. English-only becomes the displaced and misleading culturalist argument: from the 1880’s through today, the myth of a pure American culture and of English as the common language both captures and prays upon the dreams and fears of people in hard economic times. English-only also becomes the way nativists with political ambitions score political points, masking self-interest as patriotism.

From 287g to Secure communities: the national strategy

A broad strategy called “Secure Communities” is quickly and quietly being implemented around the country, promising the efficient, hi-tech integration of surveillance and policing between local authorities and Immigration and Customs Enforcement (ICE). It outlines something like this: at any point during your time in the custody of local law enforcement — whether at a traffic stop, being booked, formally charged, awaiting trial, or serving a sentence — local authorities are to pass your identification information to the FBI and the Department of Homeland Security. This is true even in situations of wrongful arrest, when no charges are filed or when charges are subsequently dropped. The previous generation of Polimigra policies called 287(g) required ratification at the local level (including having local police formally deputized as federal agents) and thus was vulnerable to opposition from community organizations, local legislators and often local law enforcement. In contrast, no formal vote or other process of public debate is necessary for Secure Communities to be implemented locally, not even an official decree: it masks itself as a logistics improvement via augmented technological capabilities and systems integration. All that is required by County officials is signing a letter of intent to follow the Standard Operating Procedures set forth by ICE. As a result, Secure Communities has been rolled out at incredible speed and in almost deafening silence, with virtually no public oversight. Furthermore, ICE has been deliberately misleading in calling it an “optional” program: several jurisdictions have made efforts to “opt out” of the program only to have their requests mired in a confusing bureaucratic process.

Where is the border? Who is the target?

What exactly is being sold to us, wrapped up in the language of security and community? What can we recognize in the imperatives of efficiency and systems integration?

Even though President Obama has acknowledged that the immigration system is broken, that it does not realistically address migration in a globalized economy, his administration has stepped up its enforcement to unprecedented levels. According to Homeland Security, no administration in US history has ever forcefully removed more people from this country. The number of raids, arrests, mass trials, detentions and deportations is staggering – DHS has a “target” number of 400,000 deportations for this year. Immigrant families are being torn apart, but this is also an all-out attack on the communal economies and social structures they are often crucial in sustaining: neighborhood arrangements that collectivize domestic and reproductive work, economies of barter and exchange, social and institutional practices of self-governance and so on. In other words, all the social arrangements and relations that correspond to a definition of communities as living systems. These arrangements are a nuisance from the perspective of logistics management; they are an impediment to efficiency and profit maximization, as much an obstacle to the total marketization of life as public education and the few remaining entitlement programs – and equally under attack.

Poli-Migra is not new, but Secure Communities has the effect of formalizing what were until now extralegal practices of collaboration between local police and ICE. We are witnessing the proliferation of policies that virtually incentivize abusive detentions without probable cause, the policing equivalent of the economic race to the bottom. And when local police become de facto border police, all neighborhoods become de facto border zones: characterized by surveillance, repression and fear.

We are to believe that due process makes us less safe. We are to live in a state of permanent suspicion and fear. We are to build border walls within our neighborhoods, within ourselves; we are to believe that living behind these walls will make us more “secure”. But in oppressive societies no space is ever safe for anyone. We know we are being offered the “security” of a prison world with no beginning and no end, the “community” of a work camp, where all human relations that are not mediated by and dependent on capital are to be squeezed out of existence. We will not be fooled by double-talk: by political maneuvers that use the language of “security” and “community” but which actually create insecurity, further destabilize the conditions of people’s lives and push them into total dependency, increase conflict and aggression, undermine and destroy communal support systems and attack our neighborhoods. We refuse to believe in the myth of well-being for some through the degradation of others.

Our solutions, our demands – for starters:
1. An immediate end to the collaboration between local police and ICE. Local councils can pass resolutions to prohibit this kind of collaboration or “opt-out” of the program, as in the example of the 1-sentence resolution recently passed by the Washington DC district council “to prohibit the District of Columbia to transmit arrest data to the Department of Homeland Security, Immigration and Customs Enforcement (ICE)”.
2. Immediate Moratorium on deportations – A broken system should not be enforced, a lie should not be amplified. We demand a moratorium on deportations now, because we cannot confront the realities of the globalization of capital and labor while millions of people live in permanent terror
3. Immediate legalization of undocumented immigrants. Not some, all. Legalization cannot wait until a just and comprehensive immigration reform can be discussed nationally, but is a precondition for it.
4. English-only ordinances are meant to disenfranchise people by promoting the myth of a pure American culture under threat of contagion. We demand public funding of multicultural education, social institutions and public infrastructures – because the myth of monoculture is not sustainable! We demand the full participation of all people in civic life through multilingual governance at all levels. 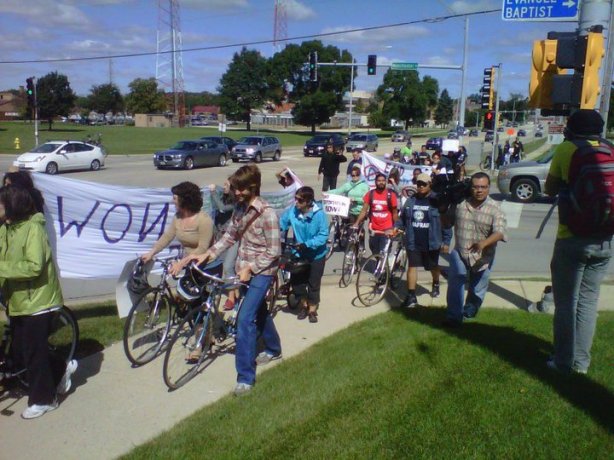 What do you think of this? Leave a Reply Cancel reply