Posted on March 31, 2011 by moratoriumondeportations 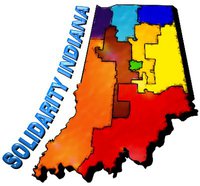 What: Press Conference to invite Chicagoans to join the Immigrant’s Caravan to Indiana When: Friday April 1st at 10:30 AM.
Where:  Federal I.C.E. Building at Clark and Congress (101 W. Congress Parkway)
Who: Members and Supporters of the Moratorium on Deportations Campaign (MDC)

Chicago IL, On Saturday April 2nd a caravan of pro-immigrant activists will depart from Chicago with a banner of support for protests against Indiana’s anti-immigrant bill proposal, SB590. The bill is similar to Arizona’s infamous SB1070, which legalized a state-wide crack-down on undocumented residents passed last year in Arizona. Communities in Indiana have called for mass regional mobilizations to voice opposition to such measures.

Action: Invitation to Chicagoans to join the Immigrant’s Caravan on Saturday April 2nd . The reunion and departure of the caravan will take place at 10:00 AM, in the heart of the immigrant neighborhood of Pilsen (S. Blue Island Avenue and W. 18th street). At the event community members can sign a symbolic “migra manta” banner that will deliver support for the undocumented residents of Indiana.  The caravan will join a march in Hammond, Indiana scheduled to begin at 12:00 pm on Saturday and deliver a banner of support to the immigrant community. The caravan will also make connections between immigrant communities in Indiana and those in Chicago.

Background: The bill proposal in Indiana, SB590, is the most recent in a wave of anti-immigrant bills sweeping the legislatures of states including Texas, Georgia, Arizona, and even Illinois (HB1969). Most of these bills contain similar components which include the use of state and local law enforcement to stop anyone they “suspect” of being in the country without documents; punitive measures against businesses that hire undocumented workers; an English-only rule for all official government documents and meetings and barring sanctuary cities within their state.

In the face of a growing climate of hostility and intolerance, Chicago activists extend a call for regional solidarity to broaden the fight against bills like Illinois’ anti-immigrant HB1969.

“Undocumented workers have become the scapegoats for a political system unable to deal directly and honestly with the crises it has helped create” explains pro-immigrant activist Rozalinda Borcila.  “….when the most vulnerable workers become more exploitable and disenfranchised, the race to the bottom intensifies, affecting us all”.

The call for solidarity goes beyond the immigrant community, as Mario Cardenas of the Moratorium on Deportations Campaign states: “We ask people to defend human rights in the United States.  There is no sense in using tax-dollars to profile and detain hardworking people.  These bills aim to create a society filled with racial tensions instead of addressing the real problem, a mass of people without rights.”

The March and Protest at Hammond Indiana is organize by the Northeast Churches of Indiana with the Title “LA GRAN MARCHA”. The time frame is from 12:00pm-4:00pm, starting at Bishop Noll Institute in Hammond Indiana and ending on 144th E. Indianapolis Blvd at St. Maria Church in East Chicago, Indiana.

This entry was posted in Uncategorized. Bookmark the permalink.