Posted on April 6, 2012 by moratoriumondeportations 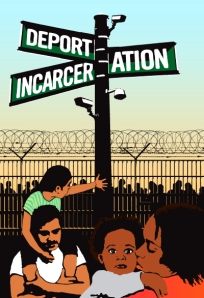 An Exploration of Deportation and Incarceration
Thursday, April 5th at UIC, 750 S. Halsted St.
The following is Jose’s testimony given at the Forced Out forum, making those connections between the immigration system and the Prison Industrial Complex.
——————–
Good morning everyone,”Buenos dias a todos,” as I share the following with you, I will want for us to think about detention and deportations of immigrants as part of the prison industrial complex. And — Immigration policies, as part of the many laws that are made by a system, for the purpose of punishment and profiting out of the lives of humans.

My name is Jose Guadalupe Herrera Soto; I am considered a criminal, an illegal alien, a person without proper documentation. I have been labeled a felon, someone with a criminal background and have been stigmatized by such labels and terminologies.

You might ask who is behind all of these labels and imposed terminologies. Well — behind all of this, stands an unjust and racist US system of oppression that targets marginalized communities. This system was build for the purpose of profiting out of the criminalization, illegalization, racialization, incarceration and deportation of human beings; a system that pushes people into breaking capitalistic laws and thus turns humans into commodities.

You see, in 2008 I broke some of their capitalistic laws. For the lack of a driver license my offence became an aggravated felony. I was offered a deal of serving “only 60 days” in a state prison if I was to plead guilty. I was told by my public defender, “Just take the deal, you will be out in no time.”

I witness many of others who were people of color that plead guilty and took these kinds of deals, in exchange for reduced time in prison. I decided not to follow the pattern and continue to challenge my case; as a result I spent 3 months in the Cook County jail.

I was released under probation for three-years and subject to many other mandatory court orders. A one-time offence and not having a driver license led to a short experience of being confined to cages, restricted and isolated from society.

Today, I’m challenging the system that questions my legality in the US. I’m fighting a personal battle against immigration authorities. Despite their attempts to deport me, I continue to be part of the immigrant struggle, the struggle that fights for all people – not just for a small few who are portrayed as being worthy.

As you heard earlier in my testimony, the situation where I am now, started because of my encounter with the prison system. Because of this and after my case was dealt by the Cook County Court, I was turned over to another “racist” structure, the immigration system.

The US Department of Homeland Security argues that I’m an alien present in the US who wasn’t admitted properly or arrived through the proper ways. I do not agree with them, migration is what humans do; there should be no restrictions on this– period.
Here I am to tell the government, that I’m not an alien, I’m not conforming, nor I will be part of their “racist” system, I refused to be a commodity. I’m human; I’m a person of color, a Father, a student, a son, an immigrant. I resist, challenge and I fight back through my organizing.

I have been labeled a criminal;therefore I stand up and join the struggle of those who are labeled criminals. I join the struggle of fellow human beings who are struggling to survive under the racist capitalist system we live in. I join the struggle of the marginalized, of the poor, of people of color. I join the 2.3 million people, who are behind cages, and I make no distinction between them and I, we are one, we have been labeled “criminals” by the racist system, the oppressor, the one that tries to silence and destroy our communities. In form of resistance, we speak out and fight back; we challenge and organized against the criminalization, illegalization, and incarceration of human beings.

Here today I ask from all you, to join in the struggle as well, to advocate on behalf of us, the criminals the illegal aliens.
No, to the business of selling and profiting of humans.
Yes, to the abolition of detention centers, prisons, and the capitalist system.
We humans are not commodities and will continue to fight and make alliances to combat this. I am Jose Guadalupe Herrera Soto and I am grateful to share my testimony with all of you here today. Thank you!

This entry was posted in Uncategorized. Bookmark the permalink.